skip to main | skip to sidebar

Open discussion on the evolution of Australian and New Zealand Thought

Importance of the history of Australian thought

In his blog round up at Catallaxy Files, Rafe commented that one of his new year's resolutions was to get this blog moving again. I, too, feel this need.

The blog originally began because of a perceived gap in public discussion about the history of Australian and New Zealand thought. You see, it is hard to understand how and what people think now if you don't know what they thought in the past. The past is always with us, often unseen.

I am old enough in a personal sense to have lived through a number of changes in thinking. Wearing my historian's hat, I also spend a fair bit of time looking at aspects of the past. There I am concerned with what happened and, to a degree, why. Increasingly in my research, I feel the need to drill down, to break through the bounds imposed by present thought and perceptions to actually understand just how people saw their world.

Recently in A personal memoir on Mel Ward, I looked at aspects of the life of one man through the prism set by my relationships with him. What I didn't really say in that post is that the period I was talking about was a period in which different ideas clashed, a clash that affected Mel and his work. It wasn't just a clash between past and new ideas, but also between different concepts of the new.

Another recent post, Can New Zealand match Australian incomes?, was in part a discussion on a current policy debate. However, clashes of ideas and different ways of thinking again underlay that debate.

The idea, for example, that the role of Government is simply to set the institutional framework, to provide certain services, and then the market will deliver the best result is one part of that debate. The views and influence of management writer Michael Porter is another part.

Club Troppo describes its role in these terms: Politics, economics, law and life from a 'radical centrist' perspective, defined by Noel Pearson as "the intense resolution of the tensions between opposing principles". Catallaxy Files, by contrast, espouses free markets, the Austrian School of Economics, and sometimes Libertarian positions. Different blogs, different positions.

But how do these blogs fit into the history of Australian thought? They didn't just arise. Clearly, both have different groups of followers. So what do they draw from?

To my mind, this is quite an important question: both blogs are concerned with the now; both blogs have been classified by the Australian National Library's Pandora Project as worthy of permanent retention so that their shadow will continue; yet they are very different and have different impacts.

So returning to my opening point, I guess that you can expect Rafe and to try to grow this blog. The need is still there.

Don Aitkin's What was it all for?

This is one of a number of a number of parallel posts recording my reactions to Don Aitkin's What was it all for? The Reshaping of Australia. (Allen & Unwin, Crows Nest, 2005). I will add a full list of posts later.

Because the book centres on social change in Australia over fifty or so years, it contains a lot of material on the changing way Australian's think. The use of the Armidale High School leaving certificate class of 1953 as a prism provides a personal element to the story.

Overall, I think that the book illuminates many of the changes that have taken place not just in Australia, but in other countries as well.

It has been a very long time since we posted. It's not that we have lost interest, just that posting has been hard in the middle of busy lives. I hope that we will do better in future.

Belshaw's world: In memory of Bruce Mitchell records the death of University of New England historian Bruce Mitchell. Bruce began as a Labor historian, then became heavily involved in local and regional history. Here he made a significant contribution not just in terms of his own work but, more importantly, through the contribution of his students. 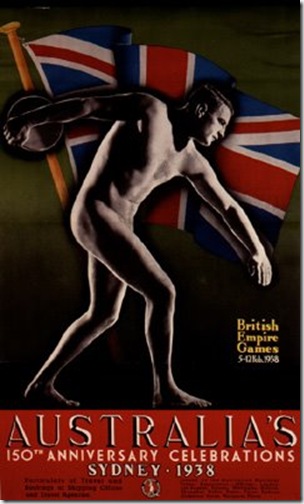 Continuing our series on resources that can be used to flesh out the history of Australian and New Zealand Thought, Australia's National Library had a fantastic exhibition of Australian travel posters from 1930 to 1950.

Visual material of this type can be a great help in understanding the way people thought of themselves, how they wanted to be thought of by others.

Our thanks to the Other Andrew for drawing the exhibition to our attention via his post To Australia Via Suez Canal!

Continuing our series on reference sources, Picture Australia provides access to a wide range of visual material held in various official collections around Australia.
Posted by Jim Belshaw at 18:12 No comments:

Australia and New Zealand on screen

Australian Screen is a very useful source of information on Australian films including home movies. I find some of the curator's comments mildly annoying because I disagree with them, but that's a carp.

NZ on Screen is the New Zealand equivalent.

We already have the links to the Australian and New Zealand Dictionaries of Biography on the side bar. These are great because of the way you can follow through on areas and topics.

Another interesting Australian on-line biographical resource is Australian Biography, material on a range of Australians originally prepared by Film Australia. I found it because I was looking for material on Thomas Kenneally.

We have created this blog to provide an open, pluralist, forum for civilised discussion on the evolution of Australian and New Zealand thought.We welcome contribution whether by comment or post.
If you would like to become a posting contributor, please contact Jim Belshaw - ndarala(at)optusnet(dot)com(dot)au. Posting need not be a burden. Irregular contributions are welcome. In time, we hope to build a team that will provide diverse and stimulating viewpoints without too great a load on any contributor.